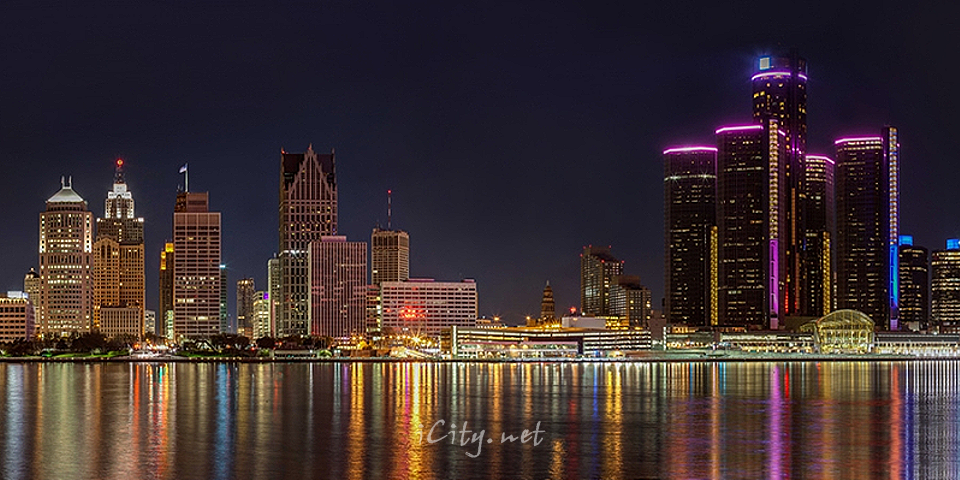 Detroit has had a profound impact on the world. From the advent of the automotive assembly line to the Motown sound, modern techno and rock music, Detroit continues to shape both American and global culture. The city has seen many of its historic buildings renovated, and is bustling with new developments and attractions that complement its world class museums and theatres. The city offers myriad things to see and do. Detroit is an exciting travel destination filled with technological advance and historic charm.

Downtown Detroit is unique: an International Riverfront , ornate buildings, sculptures, fountains, the nation’s second largest theater district, and one of the nation’s largest collection of pre-depression era skyscrapers. Two major traffic circles along Woodward Avenue surround Campus Martius Park and Grand Circus Park, both gathering points. The city has ample parking much of it in garages. Many historic buildings have been converted into loft apartments, and over sixty new businesses have opened in the Central Business District over the past two years. Downtown Detroit features the Renaissance Center, including the tallest hotel in the Western Hemisphere, the Detroit Marriott, with the largest rooftop restaurant, Coach Insignia. Many restaurants emanate from the Renaissance Center, Greektown, the arts and theatre district, and stadium area. Joining the eastern, riverfront parks, the city has the 982-acre Belle Isle Park with the large James Scott Memorial Fountain, historic conservatory, gardens, and spectacular views of the city skyline.

Visitors may reserve a public dock downtown at the Tri-Centennial State Park and Harbor. Great Lakes Cruises are also available. Surrounding neighborhoods such as Corktown, home to Detroit’s early Irish population, New Center, Midtown, and Eastern Market (the nation’s largest open air market), are experiencing a revival. Detroit has a rich architectural heritage, such as the recently restored historic Westin Book-Cadillac Hotel, the Guardian and Fisher buildings with exquisitely ornate interiors and exteriors, the Detroit Institute of Arts (top five museums in the country) to name a few. In 2005, Detroit’s architecture was heralded as some of America’s finest; many of the city’s architecturally significant buildings are listed by the National Trust for Historic Preservation as among America’s most endangered landmarks.

Detroit is the largest city in the U.S. to offer casino resorts. The three major casino resorts are MGM Grand Detroit, Greektown, and MotorCity. A fourth major casino is just across the river in Windsor, Ontario, Canada. Detroit Metro Airport is one of the few to offer world class hotel and meeting facilities inside the terminal. The Renaissance Center and the Southfield Town Center are among the nation’s finest mixed use facilities for large conferences. Downtown Detroit serves as the cultural and entertainment hub of the metropolitan region, Windsor, Ontario, and even for Toledo, Ohio residents, many of whom work in metropolitan Detroit. While most of the region’s attractions are in the city of Detroit, tourists will find that nearly all of the shopping malls are located in suburbs, such as Troy. The Detroit-Windsor metro area population totals about 5.9 million; it jumps to 6.5 million if Toledo is included. An estimated 46 million people live within a 300 mi radius of Detroit. The city’s northern inner ring suburbs like Ferndale, Southfield, Royal Oak, and Birmingham provide an urban experience in the suburbs complete with dining, shopping and other attractions. The Detroit area has many regal mansions, within the city and especially in Grosse Pointe, Bloomfield Hills, and Birmingham. Ann Arbor provides the nearby experience of a college town.

Detroit is an international destination for sporting events of all types; patrons enjoy their experience in world class venues. The Detroit Convention and Visitors bureau maintains the Detroit Metro Sports Commission. The city and region have state of the art facilities for major conferences and conventions.

Detroit is known as the world’s “Automobile Capital” and “Motown” (for “Motor Town”), the city where Henry Ford pioneered the automotive assembly line, with the world’s first mass produced car, the Model T. During World War II, President Franklin Roosevelt called Detroit the “Arsenal of Democracy.” Today, the region serves as the global center for the automotive world. Headquartered in metro Detroit, General Motors, Ford, and Chrysler all have major corporate, manufacturing, engineering, design, and research facilities in the area. Hyundai, Toyota, Nissan, among others, have a presence in the region. The University of Michigan in Ann Arbor is a global leader in research and development. Metro Detroit has made Michigan’s economy a leader in information technology, life sciences, and advanced manufacturing. Michigan ranks fourth nationally in high tech employment with 568,000 high tech workers, including 70,000 in the automotive industry. Michigan typically ranks among the top three states for overall research and development investment expenditures in the US. The domestic auto industry accounts directly and indirectly for one of every ten jobs in the US.