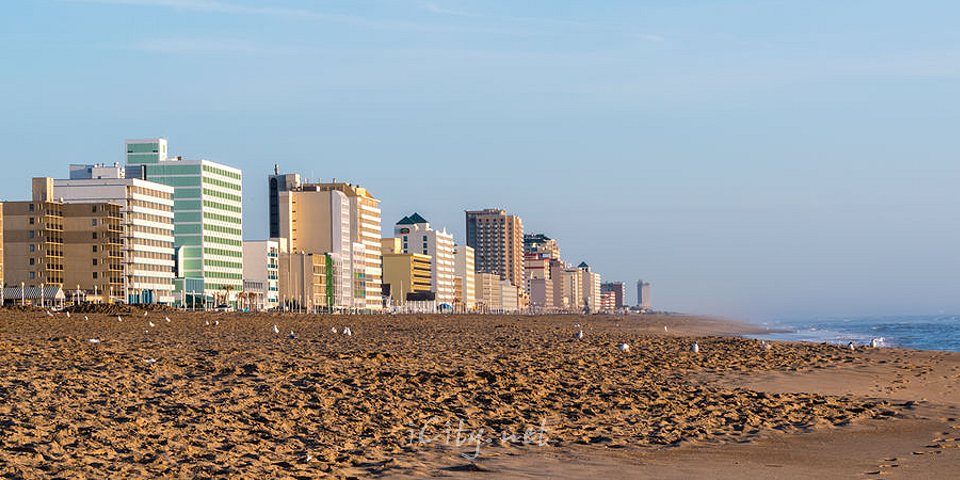 Located on the Atlantic Ocean and Chesapeake Bay, Virginia Beach borders North Carolina and ranks as the largest city in Virginia.

This major East Coast resort city welcomes college students and other travelers with a scenic boardwalk bustling with ice-cream shops, fast-food outlets, nightclubs, and places to rent water-sports equipment. There are excellent beaches north of town and thousands of hotel and motel rooms to suit every budget.

Visit the landing site where the first colonists touched shore, enjoy an IMAX theatre presentation, explore a nature trail and hundreds of interactive exhibits at the Virginia Marine Science Museum, and experience various marine habitats. In winter, the museum organizes trips to see the humpback whales that congregate off the coast.

On April 26th 1607 Admiral Christopher Newport set a landing party ashore at the present site of Virginia Beach. Fearing the area was too susceptible to attack from the native people and the Spanish, Admiral Newport chose a small island on the James River (Jamestown) on which to establish the first permanent English Colony in the new world. Fourteen years later, some of the colonists returned to the original landing site and settled in the area that is now Virginia Beach.

Abundant fishing and fertile soil assured the area’s success. In the late 1800s, Virginia Beach developed as a resort following construction of a hotel and a railroad linking it with Norfolk. After World War I it became an important base in the national coastal-defense system and today is home to Little Creek Naval Amphibious Base, Oceana Naval Air Station, and Fleet Combat Direction Systems Warfare Training Center at Dam Neck.

With its excellent beaches and many fine hotels, Virginia Beach is one of the most popular resort destinations on the east coast and one of the fastest growing cities in the United States.